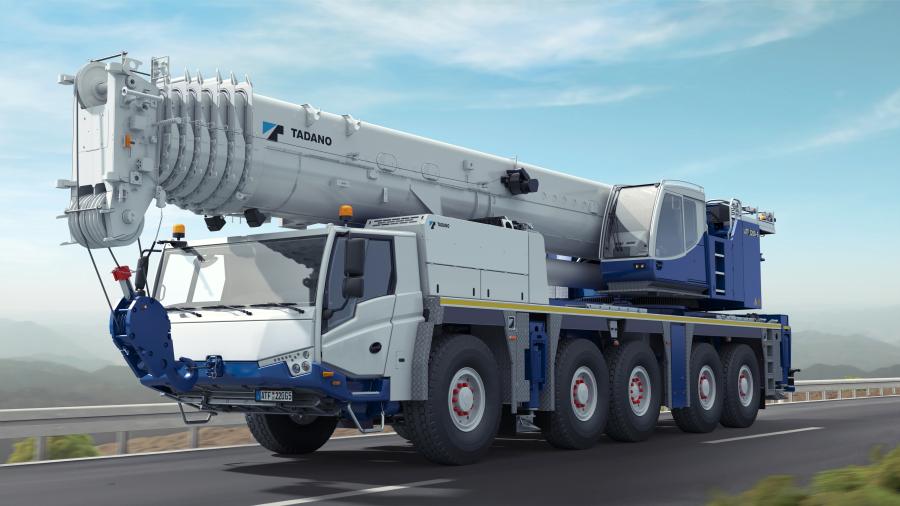 Tadano's ATF 220G-5 all-terrain 5-axle crane offers a wealth of possibilities for a great range of applications, making it one of the most efficient mobile cranes on the market. The successful crane now also comes with the latest engine technology and even greater performance, according to the manufacturer.

The ATF 220G-5 also shines with its flexibility and cost efficiency in short taxi crane operations: It is particularly economical in the 154 to 242.5 ton (140 to 220 t) class, as it involves no additional transport or setup costs for a comparable performance.

The crane is further optimized for use on the American market – compliant distances between axles, clean axle loads and optional dolly operation support a smooth approval process taking the different regulations in American states into account.

Proven Tadano technology combines optimum performance with maximum safety. For instance, the intelligent AML-F crane control monitors the asymmetrical outrigger base, facilitating full utilization of the lifting capacity potential at any slewing angle of the superstructure. The lift and release adjuster maintains a constant radius when the load is lifted and set down, preventing the load from swinging.

The fully hydraulic HTLJ boom extension further increases the working area with no restrictions to functionality. The bottom line: Greater range of applications for optimum utilization and cost-effectiveness, according to the manufacturer.

ATF-220-5.1, the successor model of this winning crane, might look the same and use the same 2-engine concept – but due to the latest EU Stage V engines, it boasts even lower emissions and even greater performance. Higher torque at lower speed in the carrier engine means improved crane gradeability on the road.

The new superstructure engine uses up to 10 percent less fuel, as the maximum power is already achieved at lower speeds.

Not only is the new TraXon transmission quieter than its predecessor, it also enables additional driver assistance systems – such as optional hill-hold control and a rock-free function for the event that the crane does get stuck.

The ATF-220-5.1 performance boost is not limited to the road. It also shows in crane operations: It achieves up to 49 percent higher lifting capacities than its predecessor in medium-range working radii in operations with boom extension.