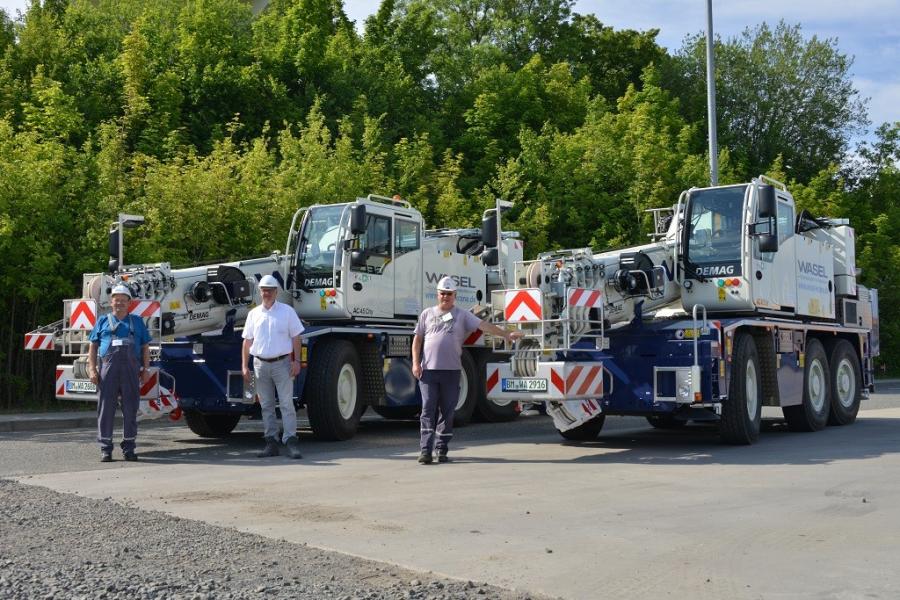 "We put our first AC 45 City into operation back in January," report crane operators Wolfgang Pahl and Hans-Joachim Schulz, who are avowed Demag and City fans and accordingly refused to miss out on the chance to pick up the two new cranes at the plant in Zweibrücken. The cranes were handed over by Sales Manager Manfred Drößer.

"We already had several AC 40 City cranes in our fleet, and they proved their worth time and time again in countless projects. And their successor, the AC 45 City, is even better," the two crane operators point out.

They then proceed to mention that Demag City cranes are simply unbeatable when it comes to indoor work, including overhead crane installation projects, and when it comes to jobs at the Düsseldorf exhibition center, where tight access roads and small working areas are the norm.

"It's often the case that this type of job can only be done with a City crane and that no other crane will do," company owner Matthias Wasel said.

He and his two crane operators mention that the IC-1 Plus control system is a crucial advantage behind the AC 45 City, as it is particularly easy to use and provides safety with its working range limiting function. Moreover, it covers telescoping, which they also consider a huge plus.

"Telescoping while under load is already one of the best features of the AC 45 City. It's fantastic – just an incredible improvement over its predecessor," Wolfgang Pahl said.

And his boss can only agree.

"The AC 45 City can telescope up to [27.5 tons] – it's really tough for the competition to match that kind of achievement."

In addition to this, the Flex Base also was a compelling argument for the crane experts from the Rhineland, as it allows the AC 45 City to extend its outriggers all the way to obstacles when space is tight. And, of course, there also are words of praise for the compact base section of the main boom, which is designed to make it possible to work with steep boom positions inside buildings with low ceilings while keeping the corresponding projection to a minimum.

"It allows us to circle even around tight curves without hitting corners," Hans-Joachim Schulz said.