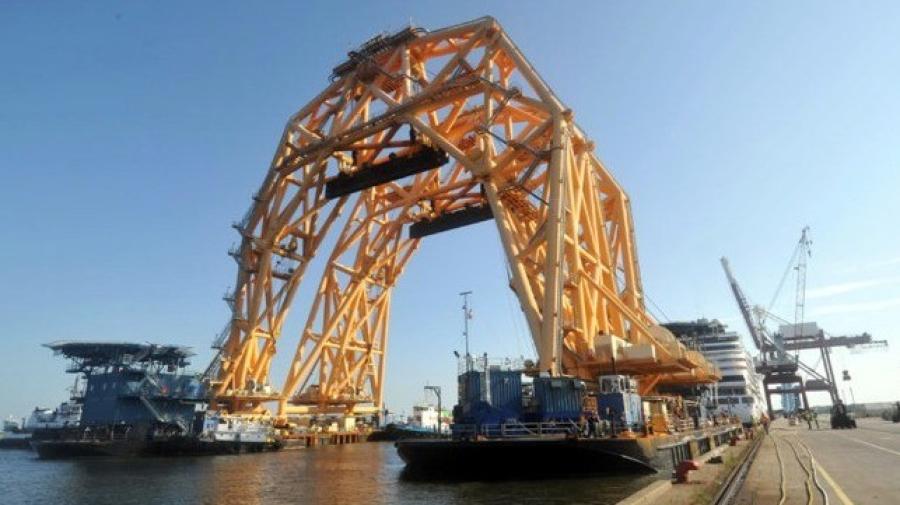 A towering, floating crane arrived on the Georgia coast in October to remove giant chunks of a cargo ship that overturned more than a year ago off St. Simon's Island.

The crane, known as the VB-10,000, was soon straddling the shipwreck of the Golden Ray, a South Korean vessel that capsized Sept. 8, 2019, approximately 70 mi. south of Savannah. The ship had just left the Port of Brunswick with 4,200 automobiles in its cargo decks, most of which remain onboard.

Experts decided the Golden Ray was too badly damaged to be removed intact, and instead produced a plan to slice it into six massive pieces for removal by barge.

That precipitated bringing in the VB-10,000, which employs a large chain designed to saw the 656-ft.-long ship into six giant chunks.

A spokesperson for the multi-agency Unified Command overseeing the salvage operation initially said the demolition and removal of the vessel would begin a few days after the crane's appearance at the site. But a problem arose with the anchoring system that engineers had built to steady the giant crane. One of the five anchors failed a strength test to prove it could hold against the required tonnage, said Coast Guard Petty Officer 2nd Class Michael Himes, a command spokesperson.

In November, the anchoring of the 255-ft.-high crane was fixed and the slicing apart of the Golden Ray was finally able to commence. The plan calls for the ship's massive pieces to be hauled away on barges.

Built by Gulf Marine Fabricators of Aransas Pass, Texas, and operated by Houston-based Versabar, the VB-10,000 is a heavy-lift twin-gantry catamaran consisting of two truss space frames atop a pair of barges. Its design was derived from Versabar's earlier VB-4000, which was developed to clear debris from toppled oil drilling platforms in the Gulf of Mexico.

The VB-10,000 is the largest lift vessel ever built in the United States.

Over Thanksgiving weekend, crews aboard the crane in St. Simon's Sound had completed the removal of the Golden Ray's bow. Officials had estimated it would take 24 hours for each cut to be made, but due to several setbacks, including the cutting chain being broken and delays due to tropical storms, the first cut took more than 20 days. Barges took the piece to a site near the Port of Brunswick at Mayors Point.

Crews are preparing to next cut the stern of the ship, according to Himes.

"With the inner sections, which hold the majority of the cars, we'll be using dry dock barges, so we can lift them minimally and slip the dry docks underneath, seal them and take them to a local site for dismantling," he said. "The irregular shape of the vessel can be acted upon by the tides and water moving in the sound so the methodology and the plan of removing the end sections is a bit different."

The problem with the anchorage of the VB-10,000 was not the only delay in removing the Golden Ray. A busy Atlantic hurricane season as well as a handful of coronavirus infections among members of the salvage team had already put the operation behind schedule. Himes said the Unified Command has booked an entire resort nearby through Jan. 21, 2021, to isolate 100 salvage workers as a safeguard against the virus.

The Coast Guard held hearings on the cause of the shipwreck in September, where an expert concluded the Golden Ray tipped over because unstable loading had left its center of gravity too high. Coast Guard Lt. Ian Oviatt said the ship lacked enough water in its ballast tanks, used to add weight at the bottom of a vessel, to offset that of the vehicles in its cargo decks above.