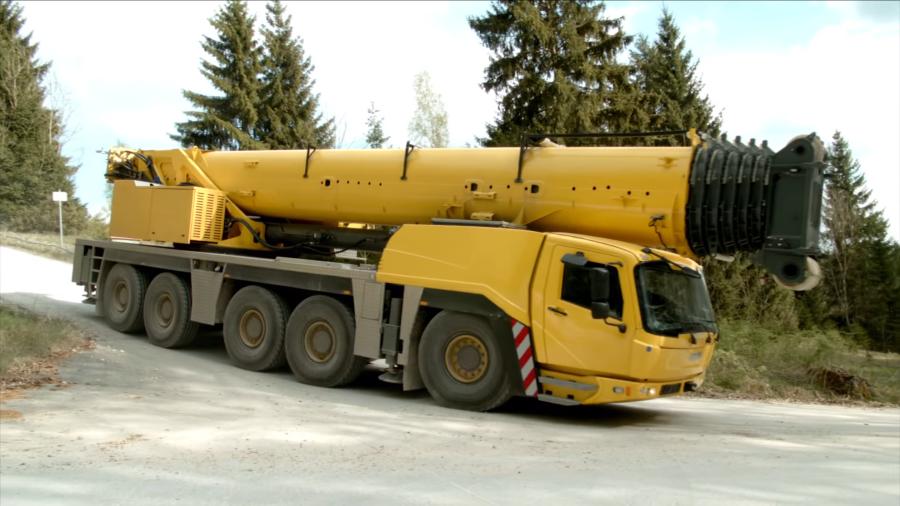 Given the constricted workspace at the site, the 300-ton (250 t) capacity mobile crane was the ideal solution for the job, as other vehicles needed to use the same road in which the crane was positioned. It was imperative the Grove crane could move out of the way on relatively short notice, so that operations at the facility could continue without interruption.

"Our approach was for the team to be able to leave the work area when refinery vehicles needed to use the same access lane where the GMK5250L would be positioned," said Carlos Villacorta Canessa, general manager at ETAC Peru, which supplied the crane for the project.

"The work had to be carefully planned and executed, given we needed to account for the time it took to assemble and dismantle the crane. The GMK5250L performed flawlessly, and we were able to complete the job exactly as planned."

Another challenge the crane helped operators overcome was moving the roof segments — some weighing up to 1.3 tons (1.2 t) — over massive oil tanks at the site, lifting and placing the parts over a 210 ft. (64 m) radius. The operation was possible due to the GMK5250L's 50-degree jib offset, compared to the usual 40 degree, which helps the crane reach further over obstacles.

The crane's Megatrak suspension system is regarded as the best off-road driveline available, enabling the GMK5250L to perform as a true all-terrain crane, according to the manufacturer. The independent suspension and all-wheel steer system means the wheels always remain on the ground and prevents stresses and weight from continually transferring between axles. Megatrak provides true ground clearance up to 2 ft. (.6 m).

Additionally, the Grove GMK5250L features the VIAB turbo retarder clutch module typically found in heavy-duty trucks. It enables wear-free starting and braking, avoids clutch overheating and burning, and reduces fuel consumption to a minimum, according to the manufacturer.

ETAC Peru's GMK5250L worked at the site for about a month without issues or downtime, from early May to early June.

ETAC is a longtime Grove and Potain partner in Peru. The company has helped expand Potain's presence in South America as it services clients in Peru, Colombia and Chile.

The Manitowoc Company Inc. , a global manufacturer of cranes and lifting solutions, announced that it has entered into a definitive agreement to acquire the crane business of H&E Equipment Services Inc.

The "Blue Beast", an all-terrain crane with one of the industry's largest lifting capacities on eight axles, made its debut recently on a project at a Veterans Administration Hospital in Cleveland.

With the launch of the Grove GHC110, Manitowoc has added a crucial machine to the top end of its growing telescoping crawler crane range.

With its AC 4.070-1 and AC 4.070L-1, mobile crane manufacturer Tadano is introducing an upgraded four-axle all terrain crane with a lifting capacity of 75 ton and two boom lengths.

Since the launch of the Grove GRT655 and GRT655L rough-terrain cranes in 2017, they have proven a popular model on job sites around the world because of their flexibility.

Maxim Crane Works has started receiving the first units from a sizable 51-crane order from Manitowoc.

Since Liverpool and Manchester-based John Sutch Cranes took delivery of the UK's first Grove GMK5200-1 from Manitowoc in July 2020, the five-axle 220 ton all-terrain crane has proved a very busy model for the mobile crane rental and contract lifting specialist.