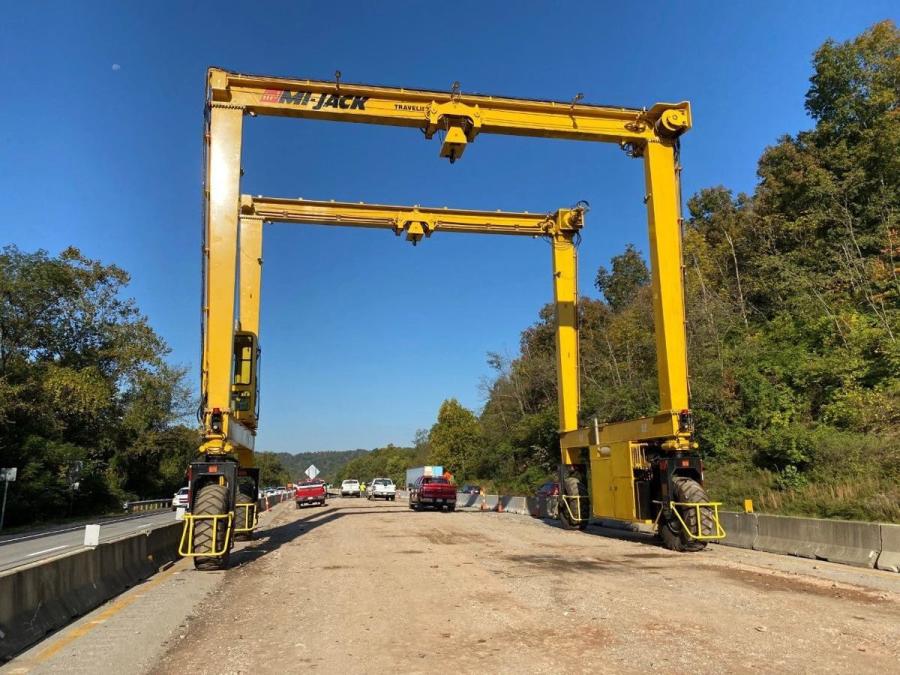 The Mi-Jack gantry crane is being used to build the new Guyandotte River Bridge near the Barboursville exit on Interstate 64. (Martin Engineering photo)

A large yellow piece of machinery has been the focal point of bridge construction near the Barboursville exit on Interstate 64 in West Virginia, but many locals and motorists have puzzled over what it is.

Hovering over the Guyandotte River Bridge, which will soon be replaced, is a gantry crane.

Standing in the median between the two existing bridges, its purpose is multifaceted, but it has helped crews tackle various obstacles while continuing work on a project spanning 3.51 mi. of I-64 between the 29th Street exit and the bridge.

The piece of machinery is located at the end of the project boundary and was brought in because of the challenging geography of the area as it relates to bridge replacement. The machine features a control cab, four wheels and two control arms.

"What happens is there are three phases [to build a bridge]. The first phase is filling in the median," said Scott Epling, West Virginia Division of Highways (DOH) District 2 manager.

The project requires the construction of a new bridge between the two existing structures. Due to the geography at the site, the contractor believed using the gantry crane was the most efficient method of completing the work.

"You've got the river and the railroad, along with some local service routes," Epling added.

To maintain an effective flow of traffic and most efficiently transport resources from above the bridge to the area below, contractors are making use of the gantry crane to do just that and lay the foundation for the new bridge, which will connect the two existing bridges.

"We don't see something like this a lot in our market, but we have an excellent contractor, and [it is] being very innovative and efficient," he said.

The project is the third and final interstate project planned for the general obligation bonds approved by voters in 2017, though more could come.

Paired with the ongoing project to expand the road and replace five bridges between Merritts Creek and the Huntington Mall, once completed, the project will create six lanes of I-64 from the 16th Street Road exit to the mall.

"It's two projects, but one contractor doing the work, and both have the same estimated completion date of December 2023," explained DOH construction engineer Chris Collins.

The gantry crane is not expected to be used on any of the other remaining bridge replacements, but it was brought in to help with the Guyandotte River Bridge due to its length. The crane had to be driven in pieces and assembled on site.

The projects are moving along as planned, and Epling said the contractor made "excellent" progress this fall due to favorable weather. With construction expected to take another few years, he stressed the importance of motorists to follow traffic guidelines while in the work zone.

"We've done targeted enforcement, but we need the public to stay alert and slow down for everybody's safety," he said. "It's a constant message we are trying to get out there."

Indonesian gold mining business PT Arafura Surya Alam (ASA) has purchased its first Grove crane: a GRT8100, which will be used to support a major program of construction work for the company, along with regular mine operation and plant maintenance duties.

As part of the construction of a new southbound Mile Long Bridge on the Central Tri-State Tollway (I-294), the Illinois Tollway will begin using an innovative gantry system to move and install bridge beams behind barrier wall in the work zone, without disrupting traffic.

The past two years at Tadano has seen a number of strategic moves by Tadano around the world. From the acquisition of Demag in 2019 to the reorganization of previously separate operations in the Western Hemisphere into a coordinated Pan-American region, from the appointment of Toshiaki Ujiie as CEO, to the brand unification this year, Tadano has been methodically implementing its long-term strategic plan on its drive to achieve the goal of becoming #1 in the lifting equipment industry.

The HCEA gives us a look at cranes from the past. The Historical Construction Equipment Association (HCEA) is a 501(c)3 non-profit organization dedicated to preserving for public education the history of the construction, dredging and surface mining equipment industries.