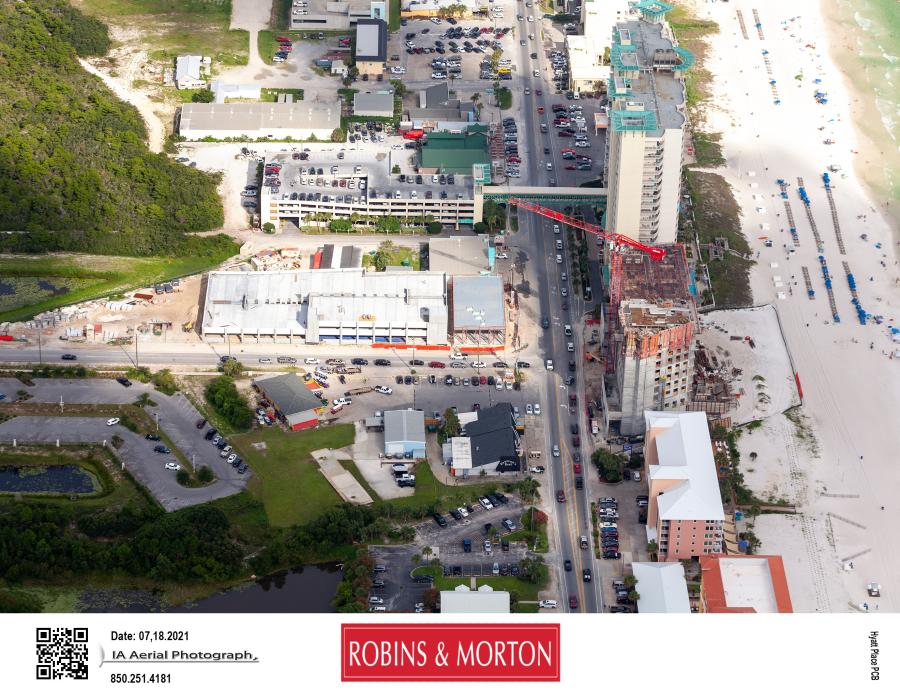 To construct the 11-story hotel, ALL specified the Potain MDT 368 tower crane with a 185-ft. final hook height and 148 ft. of jib. Assembly took two days last November, with a 350-ton Grove GMK6300L all-terrain crane, also provided by ALL, acting as the assist crane.

Building a hotel might sound like routine construction, but when you're in the tourist town of Panama City Beach, Florida — and you're building directly on the beach — nothing is routine.

The beach is adjacent to a bustling retail area loaded with national big box stores, a shopping mall, smaller boutique stores, as well as restaurants and all the typical trappings of a vacation destination. Not to mention there are already two existing hotels on either side of the construction site, and the nearest roadway intersection is one of the busiest in the area.

ALL Crane Rental of Alabama, a member of the ALL Family of Companies, which serves the panhandle of Florida, was chosen to provide the tower crane for this vertical construction project, under the direction of its customer, Robins & Morton, the project's general contractor.

To construct the 11-story hotel, ALL specified the Potain MDT 368 tower crane with a 185-ft. final hook height and 148 ft. of jib. Assembly took two days last November, with a 350-ton Grove GMK6300L all-terrain crane, also provided by ALL, acting as the assist crane.

Just how constricted is it building on a popular beach near a busy retail area? "When we were assembling the tower, the tower sections and parts were loaded onto trailers and parked all along the roadway, stretching from Target to the Walmart Supercenter," said Scott Swearengin, sales representative of ALL Crane Rental of Alabama, describing the jarring juxtaposition when heavy equipment intersects with a public retail area.

Perhaps the most important consideration of all for the project was Panama City Beach's location on the Gulf of Mexico, in a prime hurricane zone. This factored in to the Potain MDT 368 being chosen for the job.

Swearengin said his branch worked closely with ALL's tower division, ALL Tower Crane, to determine the best equipment for the environment. ALL Tower's general manager, Sam Moyer, who also is an engineer, compiled the information, ran the numbers against the region's ocean wind conditions, and generated a report determining the Potain MDT 368 was the best choice for vertical construction in this hurricane zone.

"Obviously, if a hurricane were to strike during the project, work would halt and the tower crane's jib would be allowed to simply weathervane with the winds," said Swearengin. "But what we wanted to know was, structurally, what tower was best equipped to sustain hurricane-force winds so that work could resume as soon as possible after a potential weather event. For the conditions likely to be encountered, the Potain MDT 368 came out on top."

Fortunately, the choice was never put to the test, as hurricane-force winds never materialized during the build.

Work on the hotel is nearly complete, with topping off of the tower crane expected later in August. In September, the Grove GMK6300L returns to the site to disassemble the tower and remove it from the beach.

Brittney Yares is a fast learner and an extremely ambitious person. Those two traits are why her company Brittney Kate Builds (BKB) has grown from a weekend project with a friend to a booming and respected company.

Four southern branches of the ALL Family of Companies banded together to accomplish a massive lift for construction of a new hangar at an international airport in northern Florida.

Saudi Arabia's Red Sea Project is the world's most ambitious and exciting tourism and hospitality project — a luxury destination created around one of the world's last hidden natural treasures.

The Occupational Safety and Health Administration (OSHA) has released a new compliance directive, CPL 02-01-063 for cranes and derricks.

A package of 25 new Liebherr cranes is coming to the ALL Family of Companies throughout 2022. Perhaps the most highly anticipated is the Liebherr LR 11000 lattice boom crawler crane, which becomes the largest crane in the ALL fleet.

ALL Erection & Crane Rental, a member of the ALL Family of Companies, has been honored with the Longevity Award from the Specialized Carriers & Rigging Association (SC&RA), recognizing its decades of leadership.