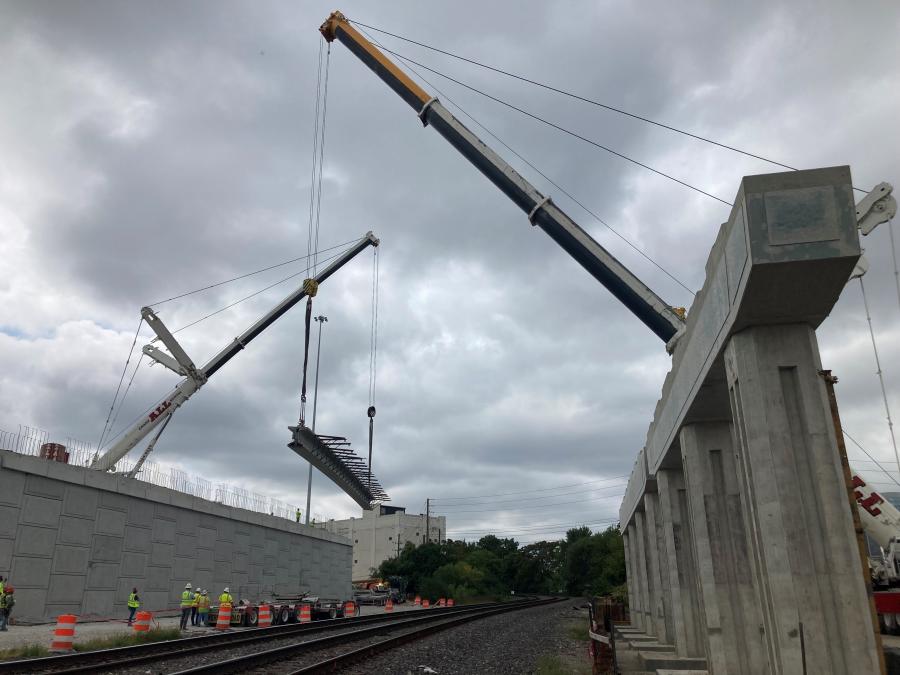 Reaching over the CSX tracks required a series of dual picks using two massive all terrain cranes, Liebherr LTM 1500-8.1 and Liebherr LTM 1400-7.1. Their capacities are 600 tons and 500 tons, respectively.

The highway project to completely re-route and reimagine Indianapolis' I-65/I-70 North Split interchange is winding down. Central Rent-A-Crane, a member of the ALL Family of Companies, has completed its work setting bridge beams for the project.

A portion of westbound I-70 was opened to vehicular traffic in early October.

The original North Split was built nearly 50 years ago and became an infamous traffic tangle, earning the nickname "the spaghetti bowl." Motorists routinely had to cross multiple lanes of traffic to reach their exits.

The project began roughly two years ago, then the interchange was totally shut down in May 2021. Central began its work in earnest September of that year.

A look at the numbers makes the project's massive scope immediately clear. A total of 390 bridge beams were set as part of 78 unique operations. Beams were set on 37 structures over 12 downtown streets, interchange infield, and dual-track CSX rail lines. September 2022 was the busiest month, with 62 beams set in that month alone.

Perhaps the most impressive number associated with Central's involvement is zero. There were zero injuries, incidents or near-misses for the duration of the year-long beam-setting bonanza.

"When we were chosen for this project, our mindset was that we wanted to supply every crane and set every beam," said Tim Welty, sales representative of Central Rent-A-Crane. "We accomplished that goal."

It took much coordination to make happen. Not just with Central's internal scheduling and securing the right-sized cranes for each job, but also working with project design-builder and general contractor Superior Construction and precast supplier Prestress Services.

Welty is proud that Central was able to supply the majority of the cranes directly from its own Indiana yards. When necessary, it could rely on the whole of ALL's vast national footprint and company-owned trucking service to fill in the blanks.

Before winding down its involvement in the North Split, there was a final critical lift operation for Central to complete, involving setting bridge beams over CSX railroad tracks.

Reaching over the tracks required a series of dual picks using two massive all terrain cranes, Liebherr LTM 1500-8.1 and Liebherr LTM 1400-7.1. Their capacities are 600 tons and 500 tons, respectively.

"We dual picked 12 beams over the tracks," said Welty. "Then, we had a second set-up for 12 additional beams that the 1500 was able to single pick."

The difference was that beams could be brought closer to the crane for the second set of picks, dramatically reducing the work radius and capacity needed to accomplish the task.

Central's crane work on the project was completed just a few weeks after setting the beams over the railroad tracks. The full project isn't over yet, as paving, ramps and guardrails are yet to be completed. Westbound traffic is estimated to be completely open by December, with the entire interchange open by next March. 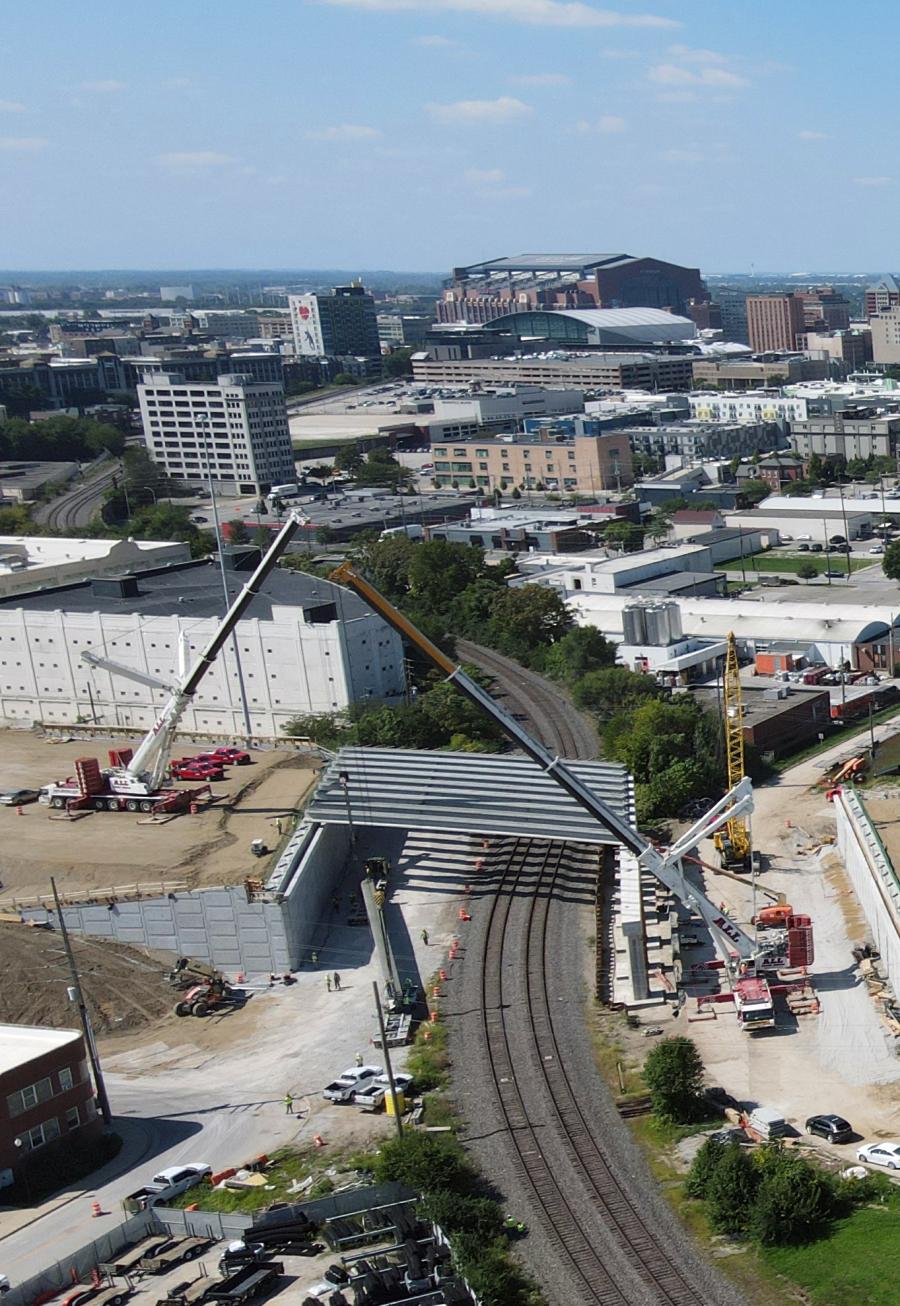 The future is electric — Tadano clearly thinks the same way and presented a demo of an all terrain crane with an electrified superstructure to a broad public for the first time ever at this year's bauma.

Manitowoc used its attendance at bauma 2022 to launch its latest rough-terrain crane: the Grove GRT8100-1.

Visitors to bauma 2022 saw the design and technology upgrades that will roll out to the Potain range of luffing jib tower cranes as Manitowoc introduced the first in a new generation, the MR 229.

Manitowoc unveiled the latest addition in its Potain MDT City crane range at bauma 2022, the 6.6 ton capacity MDT 159, which fills the gap between the MDT 139 and MDT 189.

After taking a dip in 2021, the North American crane sector is experiencing a comeback. In its first quarter report released in April, the Rider Levett Bucknall (RLB) Crane Index logged a 4.5-percent increase in cranes at work across the continent.

The first erected Potain MDT 489 tower crane in North America is now at work on a construction site in Madison, Wis., near the state capitol.