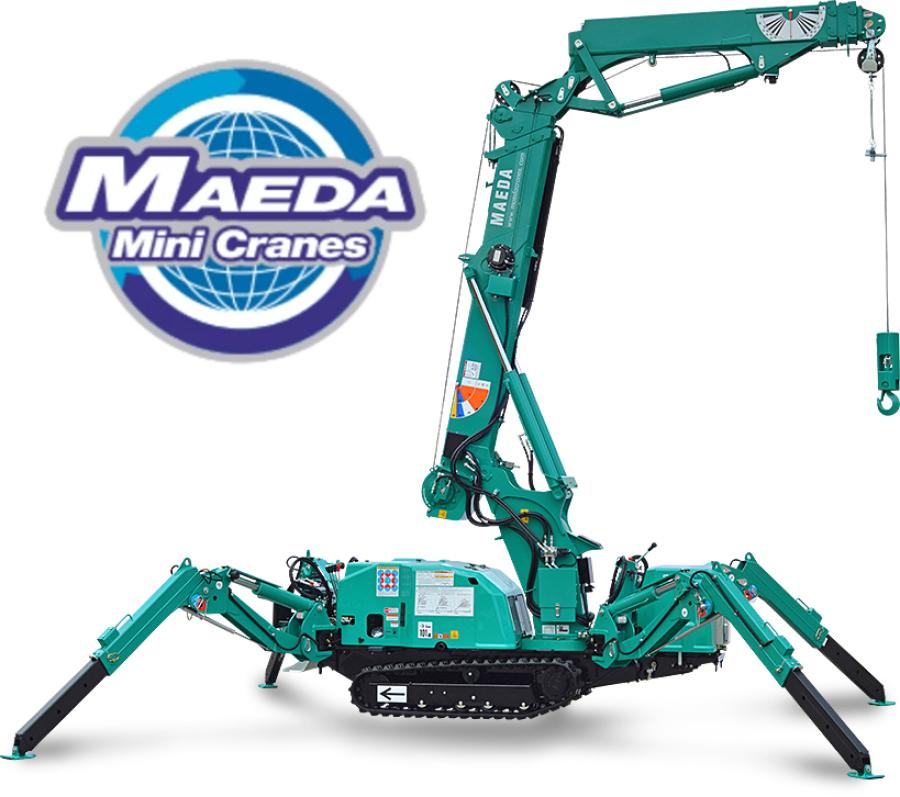 The ALL Family of Companies is once again an authorized dealer of Maeda mini cranes. ALL also is adding 13 Maeda spider cranes to its own fleet.

ALL's exclusive territory for Maeda sales covers the states of Ohio, Indiana, Illinois and Wisconsin. ALL will sell and service Maeda's full line including spider cranes, crawlers and battery cranes.

Considered the smallest cranes in the world, Maeda cranes can go where other cranes simply can't. With a width as little as two and a half feet, many can actually fit through standard doorways.

The construction industry is especially fond of these small cranes for their ability to be placed high up in a structure and assist with glazing and curtainwall installation. Josh Doyle, general manager of ALT Sales Corp., the boom truck division of the ALL Family, expects construction to remain a popular market for Maeda via ALL, with other applications emerging.

"The advent of Maeda battery-powered cranes opens a whole new world of indoor crane operations due to the lack of exhaust emissions," said Doyle. "I expect those cranes to pick up work inside warehouses and for interior remodeling jobs in industrial and commercial settings."

"The multi-angle outriggers are a game-changer. They take cranes that already could move in close due to their small size and get them that much closer to the work," said Doyle.

The Maeda spider cranes added to ALL's own fleet are being deployed throughout the four states in which ALL is an authorized dealer, so customers unfamiliar with the product can see their performance for themselves.

Japanese-made Maeda originally carved out a niche for itself with its small, versatile spider cranes. It has made a push into the U.S. market with the formation of Maeda America Inc., headquartered in Houston, Texas.

The ALL Family of Companies is beefing up its stock of Manitowoc lattice-boom crawlers, with a focus on the versatile 330-ton class MLC300 cranes.

Austrian company Engl, based in Schwoich, Tyrol, has added a new Grove GMK4100L-2 all-terrain crane to its fleet.

A1A Software LLC will release a variety of stand-alone lift planning tools in the A1A Product Suite, and it will introduce a new version of iCraneTrax during ConExpo-Con/AGG, March 14 to 18, 2023, in Las Vegas.

DICA has announced that the International Union of Operating Engineers' (IUOE) Training Center in Crosby, Texas, has received a set of FiberMax Crane Pads to use with its two new all-terrain cranes.

Cranes, Crew From ALL Aid in Hurricane Ian Rescue Efforts →

Hurricane Ian struck Florida in late September. One of its enduring images was the collapsed Sanibel Causeway, which links Sanibel Island to Punta Rassa near Fort Myers on the mainland.

The ALL Family of Companies, the largest privately-owned crane rental and sales enterprise in North America, has purchased a package of 11 new all-terrain (AT) cranes from Liebherr, ranging in capacities from 135 to 900 tons.

Safety is key when any crane is on a job site, but a tower crane requires safety managers to have a rescue plan in place.