'Rest of the West' $455M Project Starts to Take Shape 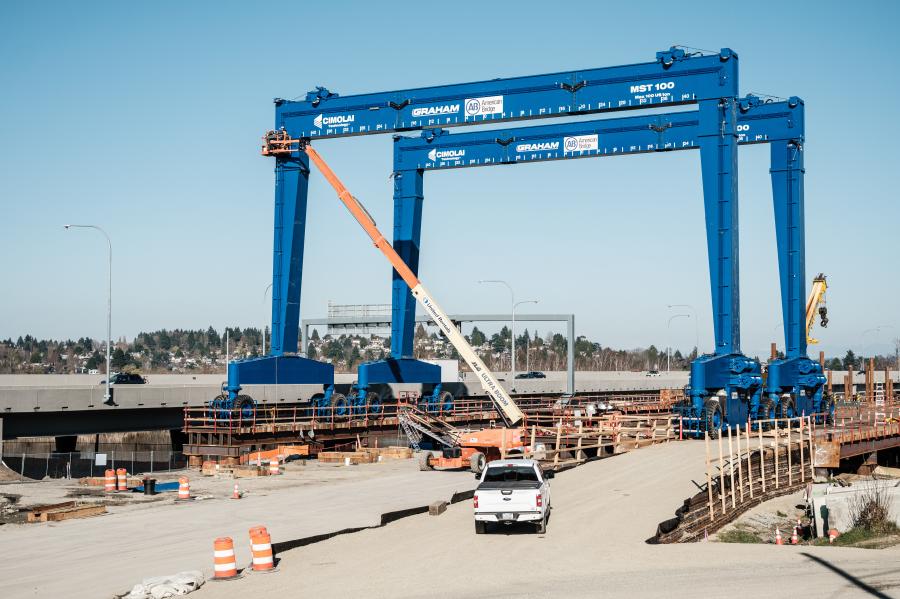 The project required crews to saw cut the girders from the old bridge to get them ready to be removed.

With two new gantry cranes towering against the sky, there's no doubt a $455 million project outside of Seattle is well underway. It's part of a program the Washington DOT (WSDOT) calls the "Rest of the West," a series of projects for the remaining $1.6 billion in improvements to SR 520.

The Montlake Project is the first on the list and will depend greatly on four gantry cranes, two of which were just constructed.

"They are capable of picking up 100 tons," said Steve Peer, media manager of WSDOT. "The tires are six-feet tall, so when someone stands next to them you can really get the magnitude of it. Each crane is 55-feet tall and 95-feet wide. Because the highway they are building is a bridge over Lake Washington, the contractor is building two work trestles on either side of the existing highway bridge. The trestles will provide a track for the gantry crane tires and crews will use the gantry cranes to first remove the old 1960s bridge structure with two lanes and later to build a new three lane highway bridge."

Along with the gantries, there are numerous other cranes on site, Peer said, noting, "It's like a crane ballet out there sometimes and the contractor is conducting a highly coordinated dance."

The Montlake contract was awarded to Canada-based Graham Contracting who is working with American Bridge. It involves replacing an existing west approach bridge built in the 1960s that is believed to be at risk of failing in a severe earthquake. The east approach that carries westbound lanes also was rebuilt and finished in 2017.

"They built that differently," Peer said. "They used a bigger work trestle and even had barges floating below to remove and replace that bridge. It was a different, more cumbersome way of constructing it.

"By building these structures with gantry cranes hovering over the work, it reduces the impact to the lake and the need for driving as many piles in the lake bed," Peer added. "It's part of a design build contract and so what Graham did was they came up with an innovative and cost-saving way to build this. Along with their price, their innovation with the cranes and other elements helped them win this project."

The project is set in a highly urban area, calling for extensive outreach to residents and the traveling public, Peer said.

"They're really threading the needle through a well-established Seattle neighborhood. A big lid over SR 520 — three acres in size — will connect north and south communities. Transit-only bus lanes will allow buses to and from the east side to get right onto the lid and the North/South intersection of Montlake Boulevard. It allows for three acres of open space above SR 520. They're also building a bicycle and pedestrian land bridge. The spotlight is on the contractor and they are doing a great job so far."

SR 520 connects Seattle to the Eastside suburbs, including Redmond — home to Microsoft — and carries 84,000 vehicles per day. It's a "crucial" way to cross Lake Washington and features two floating bridges — SR 520's floating bridge is the longest in the world. The project is expected to be completed mid 2023.

As part of the construction of a new southbound Mile Long Bridge on the Central Tri-State Tollway (I-294), the Illinois Tollway will begin using an innovative gantry system to move and install bridge beams behind barrier wall in the work zone, without disrupting traffic.

Poinciana, Fla., a suburban community near Kissimmee, is one the fastest-growing areas in the state's central region.

Work continues on the $2.3 billion reimagining of Interstate 4 in and around Orlando, Fla. The highway reconstruction project, begun in 2015, has entered Area 4, a 6-mi.

Tandem RTC-80160s Work on Phase One of Toronto Expressway →